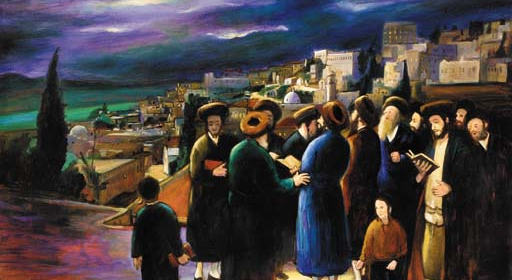 Parshas Vayeitzei begins off with Yaacov Avinu moving from Be’er Sheva to Charan. The words the Torah uses to say Yaacov arrived was וַיִּפְגַּ֨ע בַּמָּק֜וֹם – and he reached the place. Rashi learns out that through the word וַיִּפְגַּ֨ע, it means that Yaacov compiled the Tefillah Maariv. But why does Rashi learn that it means initiating a Tefillah, and not the simple meaning of just reaching his destination? Furthermore, what does it mean that he “started” Maariv? He did not daven the same Ma’ariv that we daven nowadays, that Hashem should rebuild the Beis HaMikdash, or about the restoration of Dovid HaMelech’s kingdom, Yaakov lived way before Dovid! What is Chazal teaching us when they said that the Avot made the Tefillot? Rav Elya Lopian זצ”ל explains that by Chazal saying that the Avot started the Tefilah, they mean that before they were initiated, we were not able to speak to Hashem unless we had a Nevuah. He explains using the comparison to the telephone: before phones were invented, it was impossible to talk to someone on the other side of the globe, but since they were made, we are able to do that easily. Yaacov Avinu is associated with Maariv because he connected with Hashem through the darkest of times: Yaacov had to flee from his house, he entered an agreement with the trickster Lavan, he had to face Esau, his most beloved wife died in childbirth, and he thought his son was dead for 22 years. However, through all this pain, Yaacov teaches us to copy him and cry out to Hashem when we are in need. This explains why the Pasuk says וַיִּפְגַּ֨ע – it is to teach us that instead of falling, no matter what state our Neshama is in, we can still reach out to Hashem and He will listen to us. This is our inheritance from Yaacov, like it says in Tehillim 145:18, “Hashem is close to all those who call to Him, to anyone who calls to Him in truth.” May we all be Zocheh to be close to Hashem and call out to Him always! Good Shabbos!

This site uses Akismet to reduce spam. Learn how your comment data is processed.